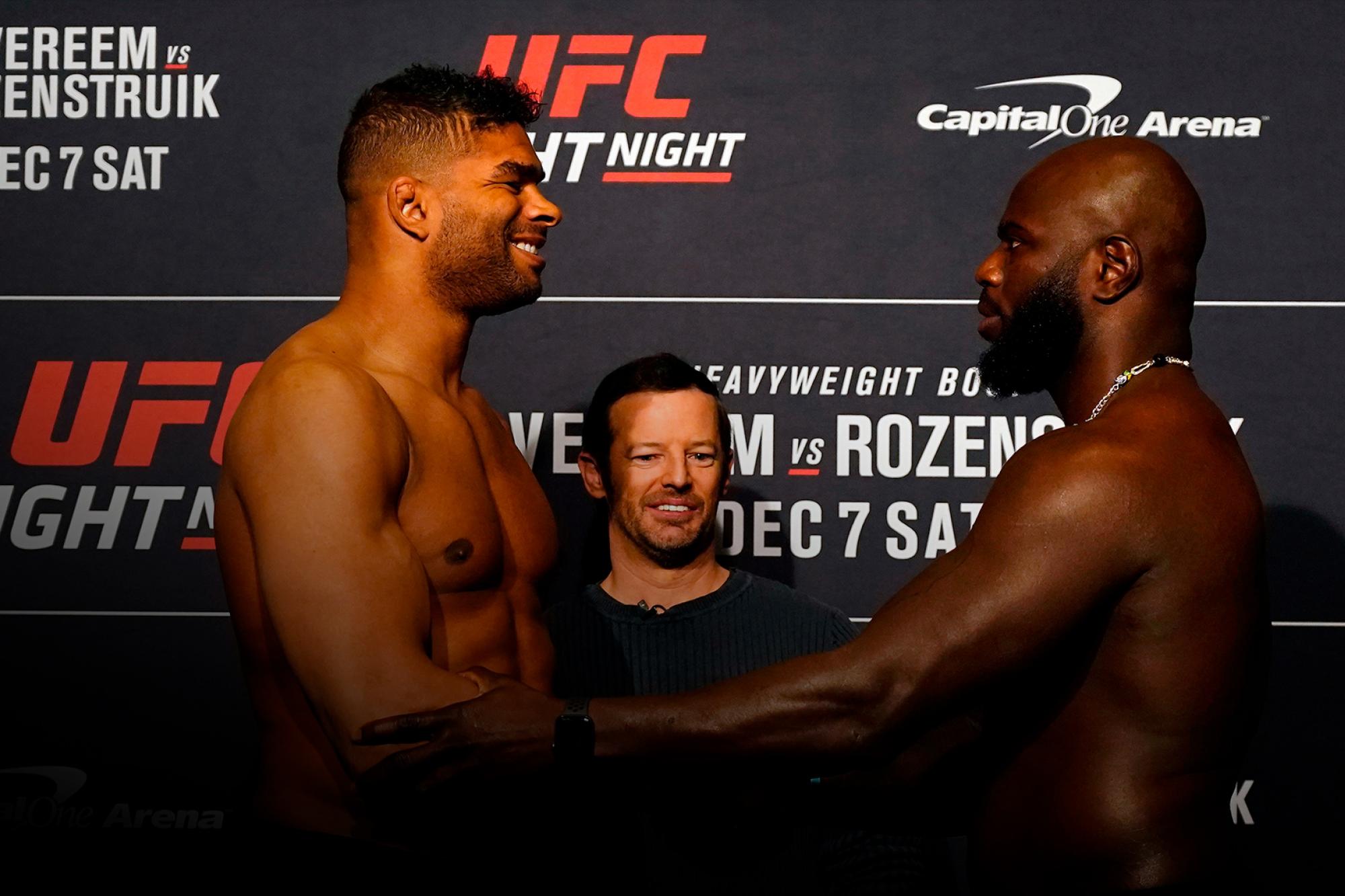 In the middleweight opener, Makhmud Muradov won his second UFC bout in as many tries, knocking out Trevor Smith in the third round.

Using an effective stick and move strategy throughout the fight that was broken up by a near submission late in round two, Muradov appeared to be sailing to a clear points win when he unleashed a three-punch combination punctuated by a flush right hand to the jaw that sent Smith’s mouthpiece flying as he fell to the mat, prompting a stoppage by referee Kevin Mulhall at 4:09 of the final frame.

Martin, who replaced Livinha Souza on short notice, was game from the start, but Jandiroba was determined to finish the bout on the mat, and after nearly sinking in an arm triangle choke in the first round, she got her wish in round two, locking up the rear naked choke that forced a tap out at the 1:16 mark.

Contender Series graduate Joe Solecki made his UFC debut a successful one, shutting out Matt Wiman over three rounds in their lightweight bout.

Solecki got the fight to the mat almost immediately, and he went right to work with his ground strikes as he looked for the opening to improve his position. With under two minutes to go in the first round, he got his opportunity, taking Wiman’s back while delivering more thudding strikes. Wiman hung tough, but the strikes kept coming until the horn intervened.

The pace dipped slightly in the second, but it was still Solecki in control on the mat, and he continued to dominate the final five minutes, leading to a clear-cut victory over the veteran competitor.

Featherweight prospect Bryce Mitchell earned only the second Twister submission in UFC history, joining Chan Sung Jung in the record books after finishing Matt Sayles in the first round.

Mitchell didn’t waste any time getting the fight to the mat and he never relinquished control as he sought a finish. In the second minute, he got the full mount position, but when that didn’t yield the desired result, “Thug Nasty” kept working until he locked in the Twister that forced Sayles to tap out at 4:20 of the opening frame.

Former Ultimate Fighter and Contender Series competitor Billy Quarantillo got his long-awaited shot in the big show in D.C. and he made the most of it, submitting Jacob Kilburn

Quarantillo had as dominant a round as you can see in the opening stanza, as he nearly submitted Kilburn on a few occasions while landing hard strikes when he wasn’t seeking a tap out. The onslaught continued in round two, and while Kilburn’s toughness was unquestionable, it was clear that he wasn’t coming back, and finally, Quarantillo put an end to the bout with a triangle choke that forced the Tennessee product to tap out at 3:18 of the second round.

With the win, Tampa’s Quarantillo moves to 13-2. Kilburn, who was a late replacement for Chris Fishgold, falls to 8-3.

An anticipated matchup between welterweight veterans Tim Means and Thiago Alves ended early, with Means submitting Alves in the first round.

Means and Alves came out ready to battle, and while Means started out well, a thudding kick left the Albuquerque product bruised up and looking for a takedown. Ultimately, Means got back into a rhythm, and a straight left dropped Alves to the mat. Means looked to finish with his fists, but when Alves was able to survive that follow-up attack, “The Dirty Bird” locked in the guillotine choke that ended the bout at 2:38 of round one.

Back for the first time in a year, bantamweight contender Rob Font made it two in a row as he scored a close, but unanimous, decision victory over Ricky Simon.

Font was on the move as soon as the fight began, stunning Simon with a quick takedown. Simon got back up immediately, but got tagged by the New Englander, who was sharp early. Around the midway point of the round, Simon stunned Font with a knee before getting his own takedown, and while Font got upright, three knees by Simon were followed by another takedown. Again, the two rose, Font briefly pulling ahead before Simon evened the score with a trip to the mat.

Font slowed the pace down in the second, working his jab in order to stay upright and out of trouble on the mat. Simon kept marching ahead, though, and after more standup control by Font in the third, he landed a body shot that got Font’s attention and allowed him to get the fight to the ground once more. Font battled his way back to his feet and kept the jabs coming, wrapping up the hard-fought victory.

It appeared that Cody Stamann was about to issue Song Yadong his first UFC loss in a clash of bantamweight contenders, but when the judges’ scores were read, a draw verdict was rendered, with an early point deduction costing Song the victory.

Stamann struck first with a takedown in the second minute, and while Song locked in a guillotine choke, he also landed an illegal knee on the downed Michigan native, prompting a point deduction from referee Kevin Mulhall. The two battled fairly evenly over the rest of the round, with Stamann making a late statement with another takedown.

There was more back and forth action in the second stanza, but a pair of Stamann takedowns seemed to add to his lead as the bout entered the final frame, and in the third, “The Spartan” apparently left no doubts, as he controlled the ground action, only to see the bout end up as a draw via scores of 29-27, 28-28 and 28-28.

After some effective clinch work by Kunitskaya early in the first round, Ladd took over with two minutes left thanks to a takedown and a steady diet of ground strikes that put Kunitskaya on the defensive until she got free late in the frame. Ladd broke open a close second round with her ground work once more, and in the third, she closed the show, dropping Kunitskaya with a left hand as the round opened before a series of unanswered strikes brought in referee Keith Peterson to stop the fight at :33 of the final round.

It was a bizarre TKO win from Ben Rothwell against Stefan Struve, but after three straight losses, the heavyweight veteran will take it, even if the lead-up to the finish wasn’t something he was happy with.

Struve scored well with his kicks as the fight began, and he kept the heat on with a head kick that briefly jarred Rothwell with 1:43 left. But a return kick from Rothwell strayed low, leading to a long break in the action as the Dutch fighter recovered. When the bout resumed, both fighters were on the attack, keeping the pace high.

The back and forth action continued in round two, but there was another repeat, this one unfortunate, as a Rothwell low kick sent Struve down to the canvas again. This time, Rothwell was docked a point, but Struve agreed to continue. Rothwell rocked Struve when the fight resumed, and moments later, a barrage of strikes by the Wisconsin native dropped the “Skyscraper” and prompted referee Dan Miragliotta to stop the fight. The official time of the finish was 4:57 of the second round.

Strawweights Marina Rodriguez and Cynthia Calvillo battled tooth and nail for three rounds in their co-main event bout, with a late charge from Calvillo leading to a majority draw verdict.

Thanks to a pair of takedowns, Calvillo had some success with her grappling at the beginning and end of the first round, but in between when the fight was on the feet, Rodriguez landed with punches, elbows, kicks and knees, keeping her opponent on the defensive.

Rodriguez’ pace and striking variety continued to impress in the second frame, and Calvillo had few answers for the Brazilian Muay Thai ace.

Calvillo got the fight to the mat in the opening minute of round three and she went all out in search of victory, nearly locking in a kimura before taking Rodriguez’ back in search of a rear naked choke. When that didn’t materialize, Calvillo fired off strikes without any response from Rodriguez until the Brazilian scrambled to her feet in the final minute. Rodriguez finished strong, but Calvillo’s third round surge allowed her to earn the draw.

Few expected the UFC Fight Night on ESPN main event between Jairzinho Rozenstruik and Alistair Overeem to go nearly five rounds, but the end result was one many predicted, as Suriname’s Rozenstruik continued his rise to the top of the heavyweight division with a late fifth-round knockout win to make it 4-0 in the UFC in 2019.

Overeem hinted at a takedown in the opening stages of the bout, and he delivered on that promise in the second minute by putting Rozenstruik on his back. “The Demolition Man” kept his foe grounded for the rest of the frame, and while he wasn’t spectacular, it was enough to secure the round.

The crowd got restless in the second as the two battled in the clinch along the fence. With a little over two minutes left, referee Dan Miragliotta restarted the stalled action, and while Rozenstruik got a little busier, a big left hand from Overeem was the biggest shot landed in the fight thus far.

While the standup action was fairly even, Overeem broke a close third round open with a late takedown, punctuating the frame with some hard shots before the horn.

In the fourth, Rozenstruik got more active, and while his flurries were flashier, Overeem continued to stay busy enough to keep his opponent honest.  Yet just when it appeared that Overeem was going to wrap up a decision win with more steady work in the fifth round, Rozenstruik struck with seconds remaining in the fight, dropping Overeem hard to the seat of his pants and splitting his lip in the process. Overeem rose to his feet, but as he stumbled, referee Dan Miragliotta stopped the fight at the 4:56 mark of round five.