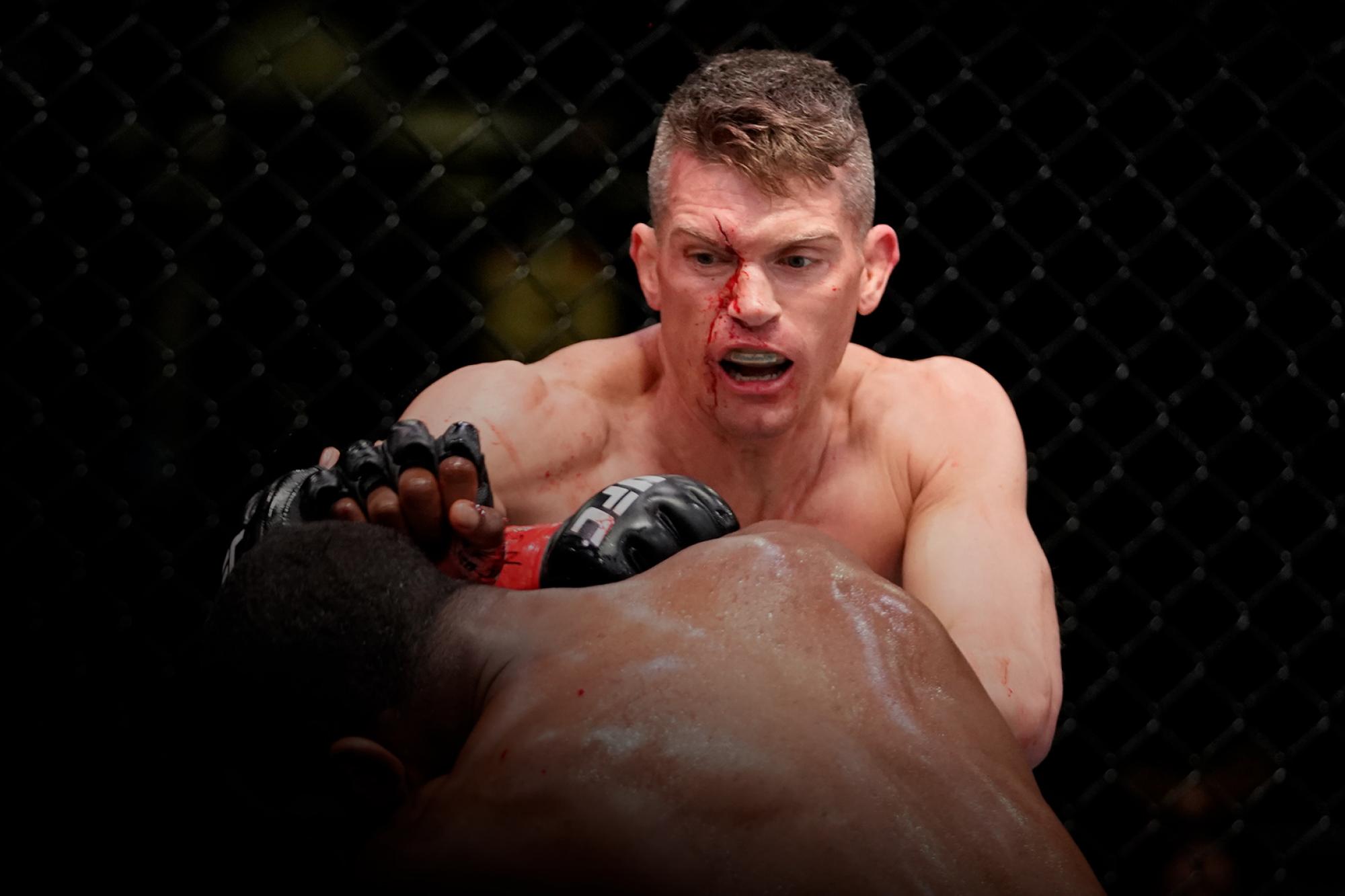 See which fighters earned a bonus on UFC Fight Night: Thompson vs Neal
By Zac Pacleb, on Twitter @ZacPacleb • Dec. 20, 2020

Performance of the Night: Jimmy Flick

Oklahoma jiu-jitsu ace Jimmy Flick made his UFC debut in style with a first-round submission win over Cody Durden.

Durden took down Flick to start the fight, but Flick got back to his feet and landed a head kick shortly after. With his leg still near Durden’s shoulder, Flick leapt and sucked Durden into a triangle choke. Not long after, Durden tapped, giving Flick his first UFC win a little more than three minutes into the first round. Flick’s flying triangle submission is a late-entry for one of the best submissions of the year, and he showed he is another fun entrant to the deepening flyweight division.

“I just showed people that I can finish fights,” Flick said. “That’s what I like to do. I felt like I started a little slow tonight. I think that might have to do with fighting so early today. I’m not used to fighting this early. In my Contender Series fight I went all three rounds and felt great. Tonight, it was just an early finish and a flying triangle. I’m ready to get back home and get back to training."

Performance of the Night: Marcin Tybura

After a tough first round, Marcin Tybura turned things around in the second frame against Greg Hardy to earn the TKO victory.

Hardy pressed forward quickly in the opening round, connecting with several straight right hands. Tybura stood tough, and adjusted in the second round, landing more on the feet before pressing Hardy against the fence. As Hardy’s gas tank dwindled, Tybura scored a high-amplitude takedown and fired off heavy ground-and-pound until the referee stopped the fight late in the round.

The win is Tybura’s fourth straight, showing he is ready to challenge those near the top 15 once again.

“I'm so confident about my skills when I go to the Octagon that I can win,” Tybura said. “I can fight anybody. Either way, I’m climbing the rankings or making money. Sooner or later, I’ll get to the top.”

Performance of the Night: Rob Font

Fighting for the first time in more than a year, Rob Font announced himself as a real bantamweight contender, stopping Marlon Moraes in the first round of their bout.

Moraes scored an early takedown and controlled Font for much of the first half of the opening round, but once Font returned to the feet with two minutes to go, he went to work. Font’s jab looked stiff and quick, and he strung together combinations to Moraes’ head and body off that straight shot. After another jab appeared to stun Moraes, Font followed with an uppercut that put his opponent to the mat. Font swarmed the former title challenger with ground-and-pound until the referee stopped the action with a little less than 90 seconds to go in the first round.

“This is huge,” Font said. “Like I said, I had opportunities like this before and I didn't capitalize on them. This time I did in impressive fashion. I just got the round wrong. I figured I’d do it in the second. I got it in the first, so I can’t complain.”

Performance of the Night: Stephen Thompson

Stephen "Wonderboy" Thompson talks about his unanimous decision win in the main event of UFC Fight Night: Thompson vs Neal.

“Wonderboy” picked right back up where he left off last November, earning another shutout unanimous decision win over the streaking Geoff Neal in similar fashion to his Fight of the Night effort against Vicente Luque at UFC 244.

Thompson started quickly, evading Neal as he pressed forward and making him pay for the perpetual forward motion. The former title challenger evaded well when caught against the fence, and he countered with precision. As the fight wore on, Thompson fended off Neal’s bullying attempts against the cage, keeping the fight at a comfortable range where he could fire off straight shots and his classic variety of kicks.

In the third and fourth round, Thompson continued with his game plan and peppered Neal with straight punches as well as knees and elbows. At the end of the fourth, Neal appeared to hurt Thompson’s right knee with a strike, impacting Wonderboy’s patented lateral movement. Thompson adjusted by biting down on his mouthpiece and engaging in wild exchanges more often, showing his toughness and chin were very much on the same level of his striking. He continued to fend off Neal, who stayed in the fight for its entirety, but in the end, Thompson showed he is very much in the welterweight title picture heading into 2021.

“With a good win over Geoff Neal and Vicente Luque – some of these up-and-coming guys, guys that are undefeated or (with) five-fight winning streaks, seven-fight winning streaks – they gotta give me somebody in the top 5,” Thompson said. “I’m still here ranked in the top-5. So, hopefully the UFC – after I heal up – will give me somebody in the top 5. Jorge Masvidal would be an awesome fight because we fought each other before.”