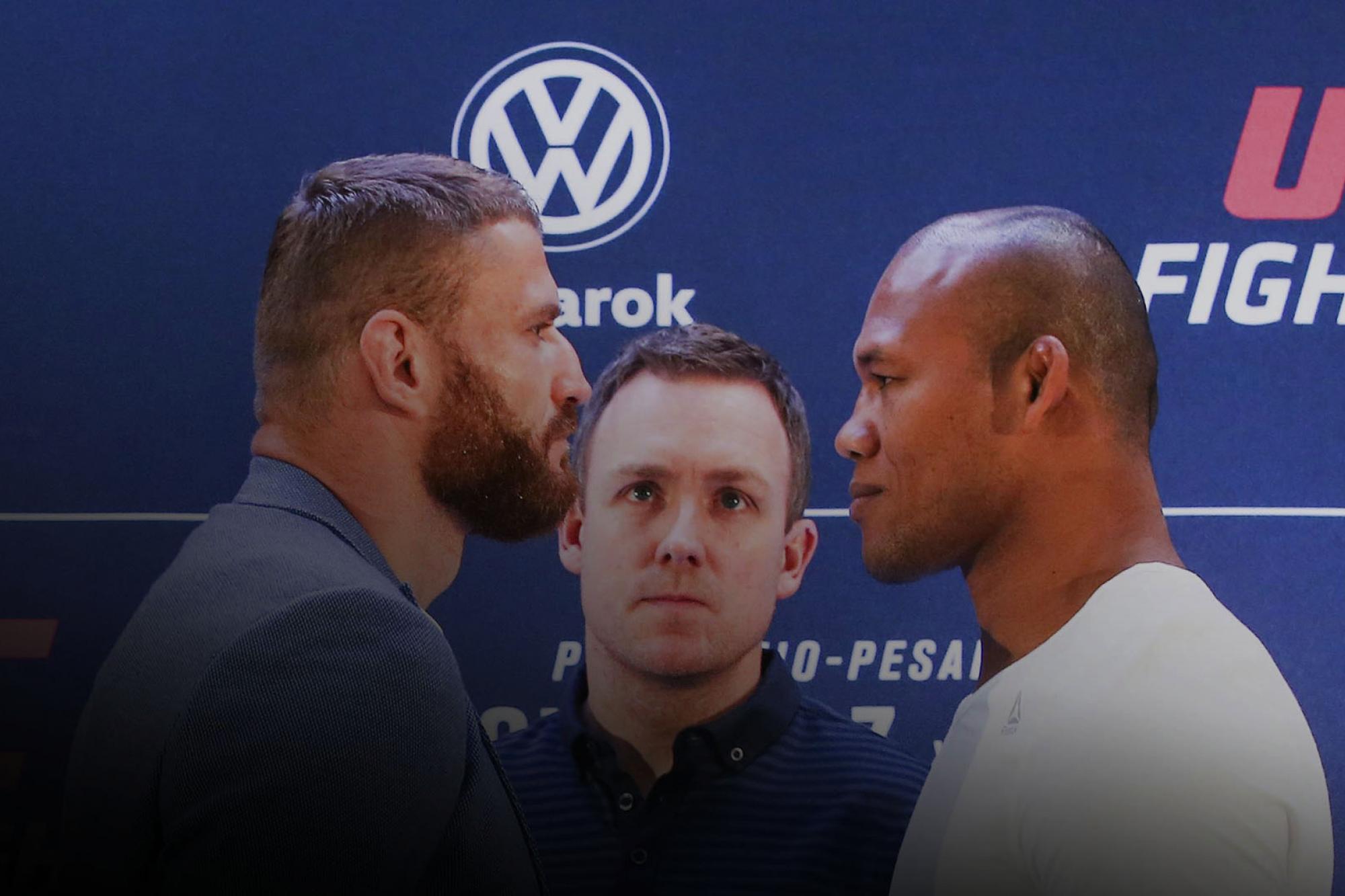 The UFC debut of highly-regarded Contender Series graduate Tracy Cortez was a successful one, as she defeated Sao Paulo’s Vanessa Melo via unanimous decision in the bantamweight opener.

Competitive throughout the first two rounds, Melo had her chances to make her move to take the fight, but Cortez steadily extended her lead once she switched from primarily striking to grappling, and after some heated exchanges early in round three, the Arizonan took Melo to the mat a minute in and she kept her there with a steady ground-and-pound attack that lasted until the final horn.

Lipski came out of her corner firing as the fight began, and within 20 seconds a right hand put de Padua on the deck. De Padua recovered after eating some ground strikes, yet after getting to her feet midway through the round, she began eating strikes again, prompting a takedown that put Lipski on her back. De Padua dominated the rest of the frame, raining down strikes from the top position.

The fight went to the mat early in round two, this time with Lipski in control on top. And while she was winning the round, she added to her lead when de Padua was docked a point from referee Fernando Portella for an illegal upkick. De Padua was far from done, though, as she tried to lock up a reverse triangle before the horn sounded.

It was Lipski’s turn to try for a submission in round three, as she sought a kneebar, but de Padua got free and into her foe’s guard. The Sao Paulo product wasn’t able to turn the fight around though, as it was clearly Lipski’s night.

The skid of former bantamweight champion Renan Barao continued in Sao Paulo, as he dropped his fifth straight to Douglas Silva de Andrade, who made a successful return to featherweight, winning via unanimous decision.

After a round where he ate some bombs from Silva, Barao was wearing the scars of battle on his face, even though he did have some success during the opening frame that included a takedown.

It was a similar story in the second, with the two each having their moments, but the cut over Barao’s left eye got worse, and in the third, Silva stepped on the gas, leaving no doubts when the final scorecards were read.

Welterweight up and comer Randy Brown patiently waited for his time to strike in his bout against Warlley Alves, and that time came in the second round, when he submitted his foe to win his second straight.

Alves put the fight on the deck seconds into the fight, and he controlled matters until Brown rose with three minutes left and then clinched with his opponent against the fence. Alves responded well, throwing Brown to the mat, and some big right hands followed. Brown gave up his back and Alves immediately sought a rear naked choke, nearly getting it before Brown was able to escape, turn and get back to his feet. The New Yorker got a takedown late, but it wasn’t enough to turn the round in his favor.

Brown wouldn’t have to worry about the scorecards though, as a trip to the mat after landing a kick turned to be the turning point when he locked in a triangle choke that forced Alves to tap out at 1:22 of round two.

Brazilian lightweight veteran Francisco Trinaldo made it four straight wins in Sao Paulo, as he eked out a close, but unanimous, decision victory over Bobby Green.

In the second minute, a left hand rocked Green and it was followed by a slam to the mat by Trinaldo, who then tried to submit his opponent with a guillotine choke. Green took his time and got free, ultimately working his way back to his feet. Trinaldo regained control briefly with another slam, but Green scrambled out of trouble and into the top position.

The pace dipped in the second round and it worked to Green’s favor as he settled in and smoothly worked his striking attack. There was more of the same in the third, but a surge in the final 90 seconds from Trinaldo made things interesting as the fight went to the judges.

Making his first UFC start at featherweight, Ricardo Ramos impressed, submitting Uruguay’s Eduardo Garagorri in less than a round.

In control from start to finish, Ramos tested out his standup early but then got down to the business of ending the fight, and after his second takedown, he took Garagorri’s back. Garagorri rose to his feet still wearing Ramos on his back, and once the Sao Paulo product sunk in the rear naked choke, it was back to the mat, where Garagorri tapped out at 3:57 of the opening round.

James Krause won his fourth straight in welterweight action, stopping Sergio Moraes in the third and final round.

Moraes wasted no time getting the fight to the mat, and he began working from side control. After a spell there, Krause scrambled into Moraes’ guard and eventually got back to his feet with 90 seconds left in the first. On the feet, Krause scored with some leg kicks, but Moraes delivered a couple hard right hands that made an impression.

In the second, the fight stayed on the feet and Krause took over, scoring two knockdowns while coming perilously close to ending the bout. But the end would come a round later, as Krause picked his spots before delivering the right hand that dropped and stopped Moraes at 4:19 of the third frame.

There was little to separate the two middleweight prospects in the first two rounds, as one swing in momentum would be rapidly followed by another. But Turman’s greater strength in the grappling exchanges may have had him in the lead heading into the final round. In the third, Turman was able to ground Perez for a second time, a pivotal score in a fight this close. With a minute left, the bloodied Perez was back to his feet, but Turman kept the pressure on against the fence until the two slugged it out in the pocket for the final seconds of the bout.

In a middleweight clash of two-time Contender Series veterans making their first trip to the Octagon, Andre Muniz won a three-round unanimous decision over Antonio Arroyo.

Arroyo blitzed Muniz early with his strikes and a takedown, only to get caught in an armbar seconds after the two hit the mat. Arroyo patiently pulled his arm loose, but Muniz kept the pressure on by scoring a takedown of his own. As the two began to get back to their feet, Arroyo caught a knee to the face while apparently down, bringing a momentary halt to the action, despite replays showing that Arroyo wasn’t grounded. When the action resumed, it stayed on the feet, with Muniz getting in some shots but Arroyo staggering his opponent before the end of the frame.

In the opening minute of round two, Muniz got the fight to the ground and took Arroyo’s back. With a little over two minutes remaining in the frame, Arroyo broke free and got to his feet while Muniz remained on the mat, allowing Arroyo to land some strikes as Muniz looked for a submission from his back. Late in the round, referee Camila Albuquerque restarted the bout, effectively ending the action of the round.

Muniz tried to goad Arroyo into an extended ground battle late in the third, but Arroyo wasn’t buying it, choosing to pepper his grounded foe with leg kicks until Albuquerque restarted the bout on the feet as the seconds ticked away on the middleweights.

Lightweight submission artist Charles Oliveira scored his second straight knockout in his hometown of Sao Paulo, as he stopped Jared Gordon in the first round to extend his current winning streak to six.

Gordon looked for a takedown early but got turned away, returning the fight to the feet. A body shot from Oliveira got Gordon’s attention, and moments later, “Do Bronx” ended the bout in emphatic fashion, with three right hands bringing in referee Osiris Maia to halt the contest at 1:26 of round one.

Stepping in for the injured Sam Alvey on short notice, Paul Craig controlled the action early against Mauricio “Shogun” Rua in the UFC Sao Paulo co-main event, but the former light heavyweight champion slowly worked his way back into the bout, going 15 minutes with Craig before a draw verdict was rendered.

Craig (12-4-1) scored well with his kicks as the bout began, and when Rua locked up with him, the Scotland native fought on even terms with his opponent at close range. Once separated, it was Craig continuing to impress, and midway through the round, he unloaded on Rua with both hands, adding to his early lead. Shogun got more aggressive later, but Craig nullified any further attacks with a well-timed clinch.

The No. 14-ranked Rua (26-11-1) had more success with his striking early in round two, and once the fight hit the mat, he kept the punches coming from above as Craig looked for a submission from his back. That submission wasn’t going to come, setting up what was promising to be a decisive final frame.

The Brazilian veteran wasn’t spectacular in the third, but he was steady throughout with his ground attack until a late standup surge and takedown by Craig that likely allowed him to leave Sao Paulo with the draw.

It was a largely uneventful first round, with Souza controlling the grappling exchanges against the fence but unable to use them to score with anything significant or get the fight to the mat.

The exchanges started heating up in round two, with both fighters trading and landing hard shots. With a little over three minutes left, Souza went all-in for a takedown, but again, Blachowicz eluded a trip to the mat despite getting pinned to the fence in the aftermath of the attempt. Late in the round, Souza did land a hard right that got Blachowicz’ attention, but it was the Poland native who landed more in the second stanza.

The action was sporadic at best in the third, with neither fighter able to follow up any offensive success with the activity necessary to build momentum.

The crowd was getting more restless in the fourth frame, and while there were a couple good exchanges in response, the most effective offense came from Souza, who controlled the fight whenever he got Blachowicz to the fence. Blachowicz landed a few hard kicks down the stretch, and his effectiveness when at range kept the fight hard to score.

Despite an apparently injured left foot, Blachowicz kept marching forward in round five, outworking Souza whenever they weren’t locked up against the fence, and he even scored a flash knockdown in the final two minutes, perhaps sealing his victory.