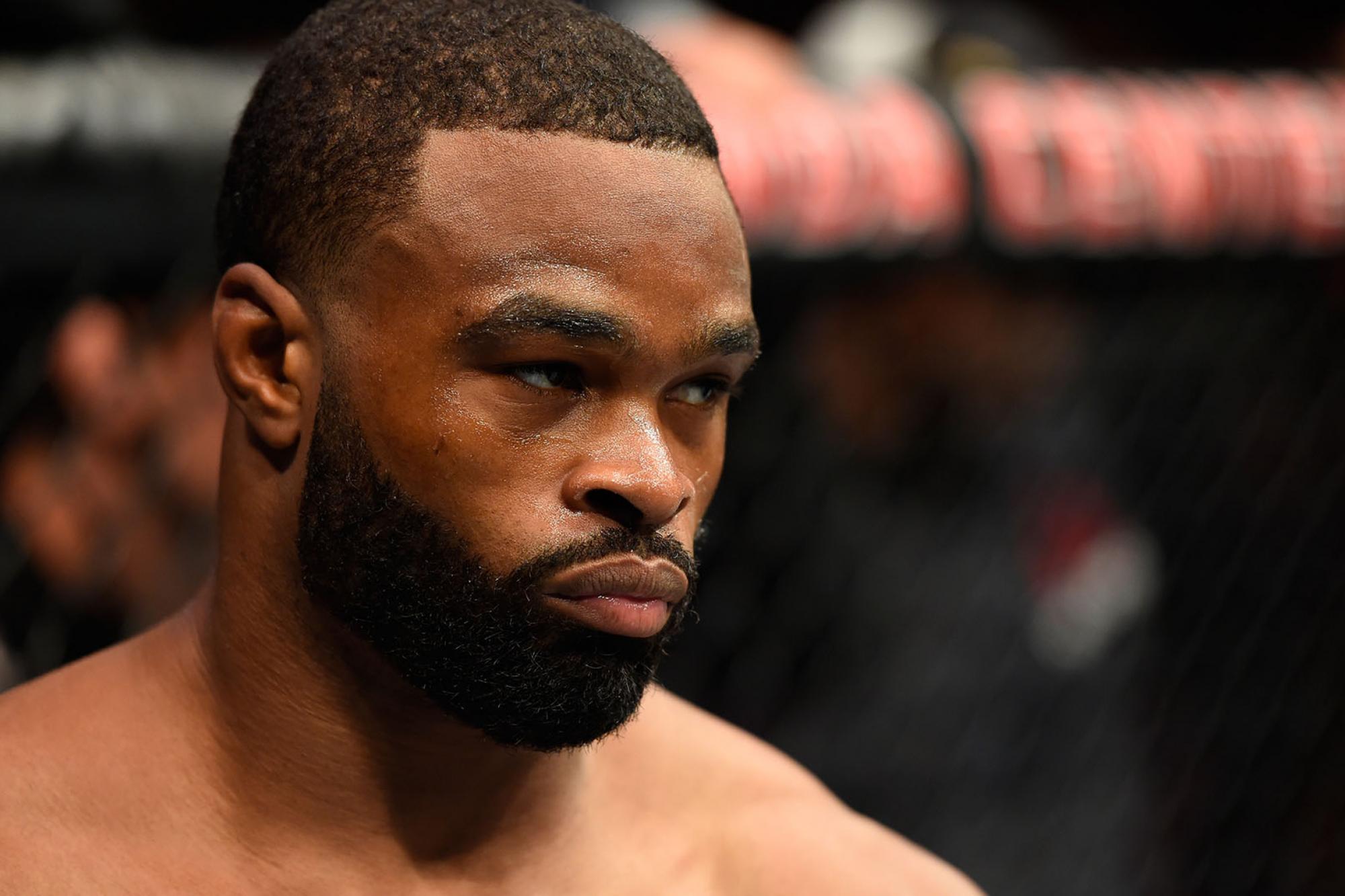 Former Champ Looks Inward For His Road Back To The Title
By Steve Latrell, on Twitter: @TheUFSteve • Sep. 17, 2020

Tyron Woodley has spoken a lot this week about fighting free. Just letting the hands go.

It isn’t just pre-fight promo talk, either. Speaking with him in person, there’s something notably different about his demeanor. Not Zen, per se, but a palpable tranquility from inward reflection.

“There’s been a few fights in my entire athletic career, including wrestling, that I felt like I was just free and I just let go. More of those moments on Saturday is just going to put me closer and closer to accomplishing that mastery of mixed martial arts.”

Mastery has never been far off for the former welterweight champion, who earned his BJJ black belt following his fourth title defense victory at UFC 228. But back-to-back losses to Kamaru Usman and Gilbert Burns ushered in a period of reevaluation ahead of his main event tilt against Colby Covington this Saturday.

His detractors delight in saying that, at age 38, it’s Father Time that’s starting to hold him back, a notion he quickly debunks.

“Have I ever shown that I don’t have anything left? You may see me pause, you may see me overanalyze a situation and not pull the trigger. But there’s never been a case of, “Oh, he looks old, he looks tired, he looks slow, he looks like he’s out of shape.’ I’ve never had that. I’ve been in five-round fights since 2016, either co-main event or main event. I’ve never had a three-round fight since. So I feel like this is something that’s just a part of me, like a basketball game being four quarters. To me, a fight is five rounds. That’s the way I mentally think about it.”

“I don’t allow what people say and what people think and what they want to see veer me off of what my gameplan is and what I need to do, because I’m the fighter,” he continues. “I’m the one that’s out there. And I know it. My coaches know. My family knows. So I’m just going to go out there and do me and do what’s best to go out and dominate. And I’ve shown more times than not that I’m fully capable of going out there and destroying anybody they put across from me.”

Who they put across from him this time, of course, is the aforementioned Covington, a former teammate and as divisive a figure there is in MMA’s present moment. Whether his shtick is real, as Covington claims, or just a character, as Covington also claims, Woodley doesn’t take much stock in either.

“I mean, at the end of the day, nobody unveils the curtain on their own gig. If they’re doing a character, they’re holding character until the job is done…that’s retirement. You don’t tell people ‘I’m playing the heel.’ Who wants to follow somebody that’s playing the heel? You’re basically creating controversy because you feel like, who you are as a person, who you are as a fighter, your skill set, is not enough. So he’s basically telling me and everybody else ‘I’m not enough, as is. I have to create something to get attention because me, myself, and who I am and what I bring to the table is not enough.’ So I feel sad for him. He has to walk around and create antics and look in the mirror and practice these lines when all I have to do is focus on destroying him.”

In the politically charged environment the world finds itself in, there’s a genuine temptation to make the clash something metaphorically larger, a battle between ideologies distilled down to two men. Woodley rejects this line of storytelling, too.

“I could obviously make it more. I can actually put the weight on it, that people don’t like him, that people want to see him beat up, they want to see me break his jaw, they want to see me do all these other things. There’s 10-15 reasons I could rattle off about why people want me to beat him,” he explains. “If I do that and it makes somebody happy, well, we’ve got to question ourselves as a society. Why are you so happy about seeing somebody else lose? Also, if I need that extra motivation to actually win the fight, I need to question my integrity in this sport.

“I just want to beat him because he’s my next opponent, and because I should. I’m the best welterweight in the world. It’s time for me—for myself—to start proving that and going out there and fighting free. Should I really be out here competing if my only motivation—had he not pissed you off, had he not been saying politically crazy stuff, had he not done these things—then I wouldn’t have wanted to beat him? No. I’m the best welterweight and I’ve got to go out there and show that.”

Should he succeed in showing that on Saturday, a path back to claiming the hardware that demonstrates he’s the best welterweight in the world would figure to be a relatively short one if he continues to harness the inward reflection.

“I don’t know who is going to win between Kamaru and Burns. It would be kind of silly to say, ‘Run it back with Kamaru.’ I want to run it back with both of those guys because, at the end of the day, we all know what I’m capable of. We all know that the Tyron Woodley we saw in the Octagon [against them] is not the same one that beat Robbie Lawler, Carlos Condit, Darren Till, Koscheck and all these different people. That was a different version. So I would like to go out there and compete against them [Usman and Burns] at my best. They came out there and did what they needed to do. They executed. So I can’t take that from them. But I would love the opportunity to earn that back. But Saturday I’m not focusing on that. I’m focusing on going out there and being free. Doing what I want to do because I want to do it. Not because of something somebody else stands for, because somebody else wants to see me beat him up, because he’s got a loudmouth, or there’s beef. It’s because it’s what I’m created to do.”