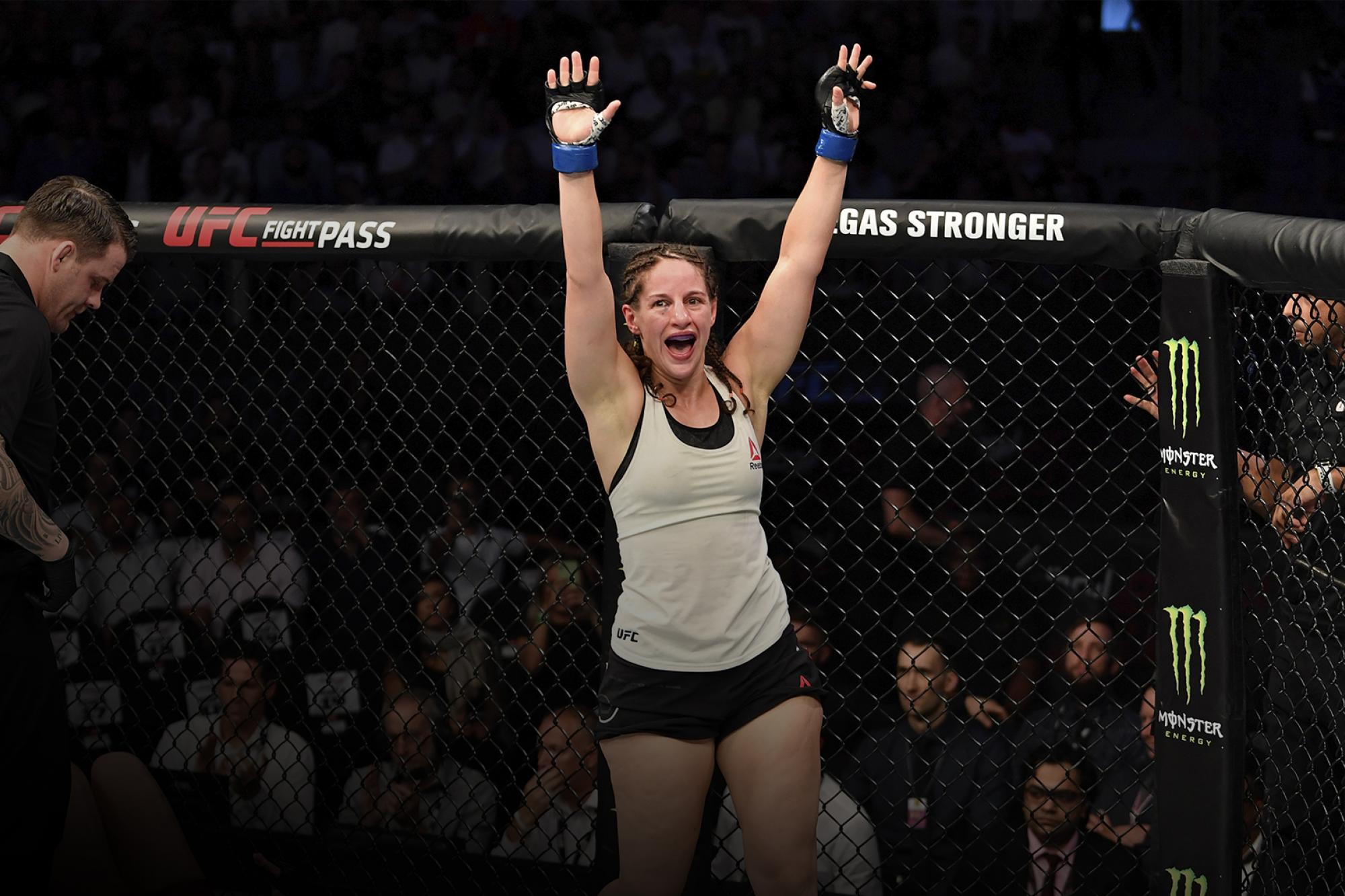 Sarah Moras Is Enjoying The Process

Check-in with Sarah Moras before she makes her 9th UFC appearance on UFC Fight Night: Holloway vs. Kattar
By Thomas Gerbasi, on Twitter: @TGerbasi • Jan. 7, 2021

This may have not been Sarah Moras’ plan when she first started training 14 years ago, but after leaving Canada for England, then the United States (with a moment to ponder Thailand), to pursue her goals as a professional fighter, it may be safe to say that she’s a lifer in this sport.

“It's definitely a lifestyle,” she laughs. “It's what I enjoy doing, so why not do it?”

On January 16, Moras will be halfway around the world on Fight Island in Abu Dhabi, where she will step into the Octagon for the ninth time to face Brazil’s Vanessa Melo. That’s an accomplishment in itself for the British Columbia native, who will make it seven years on the UFC roster in July. And while she’s not where she wants to be yet, that keeps her motivated to push forward.

“I've always worked hard, but I'm still trying to figure it all out,” she said. “I've been doing this for so long, but it's still like I'm new at it in a lot of aspects. I'm just trying to figure out how to put it all together and I'm hoping that I get it.” 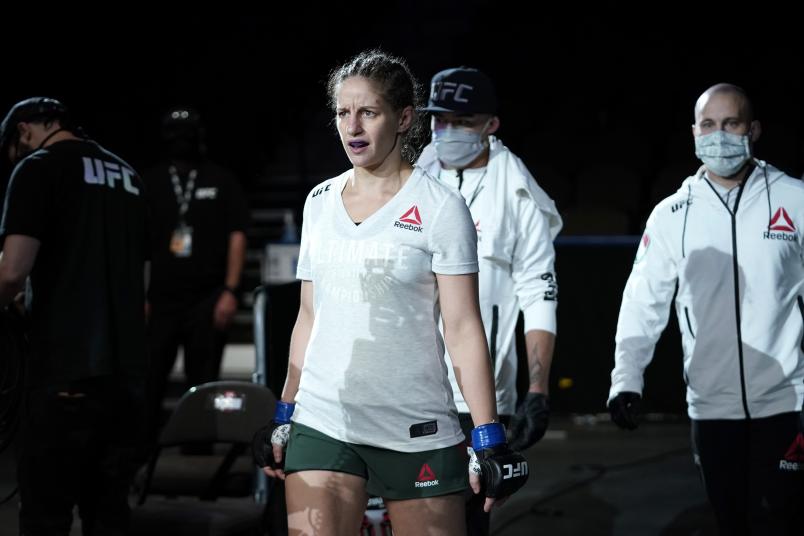 Sarah Moras of Canada walks to the Octagon prior to her women's bantamweight bout against Sijara Eubanks during the UFC Fight Night Event at VyStar Veterans Memorial Arena on May 13, 2020 in Jacksonville, Florida. (Photo by Cooper Neill/Zuffa LLC)

It’s been a tough road to say the least if you’re just looking at a won-loss record. Moras is only 3-5 in the Octagon, but as with a lot of things in the world of mixed martial arts, numbers don’t tell the whole story.

In Moras’ case, she’s been fighting killers from the start, beating Julianna Pena in her second pro fight and losing a decision to Raquel Pennington in her third. By 2013, she was on The Ultimate Fighter 18, where she defeated Tara LaRosa and Peggy Morgan before losing in her rematch with Pena in the semifinals.

All of this before she joined the UFC.

In the Octagon, she’s only been finished once in her five defeats, by Macy Chiasson. She’s gone the distance with Jessica Andrade and Sijara Eubanks, and after decisioning Alexis Dufresne, her next two UFC wins were finishes of Ashlee Evans-Smith and Liana Jojua.

See, there’s a story behind the numbers. But this is the fight business, so wins are important, and Moras knows it. Sure, there’s an appeal to having to get everything right on one particular night, but there’s the downside to that as well.

“It all depends on how I feel that day,” she laughs. “I think I wouldn't have stuck with the sport this long if it weren't for that drive and how different it is from most other sports in that way and almost every other career. But you don't lose half your income if you mess up eight minutes of a fight, even though you worked for six months or 14 years on that. I like the challenge, but it's also difficult.” 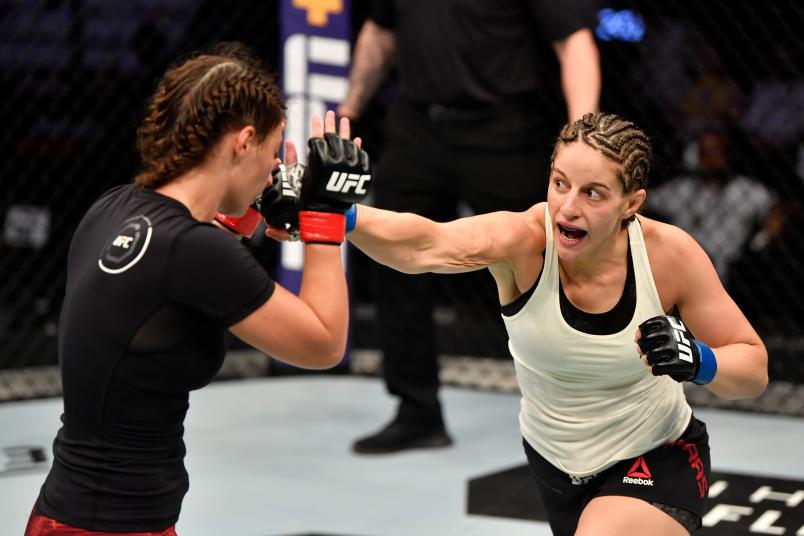 It’s also something the 32-year-old isn’t turning her back on anytime soon, if ever. Lifers are, well, in it for life, and even though there are the downsides of this game, Moras does get a moment every now and again to appreciate where her journey has taken her.

“I haven't for so long, it's so crazy, and I just keep thinking that I haven't made it yet,” she said. “So I gotta keep working. But I've actually been working on this idea I came up with, and I was looking at applications to get investors and it's like, ‘What have you done in your life that's impressive?’ And it got me thinking - I've actually done quite a bit.”

With more to come, starting on Fight Island, a trip Moras was looking forward to as 2020 turned to 2021.

“Right now, I've got a week until I fly out, two weeks until I can eat again, three weeks until I get to see my cats,” she laughs. “This year is looking pretty good for me so far.”