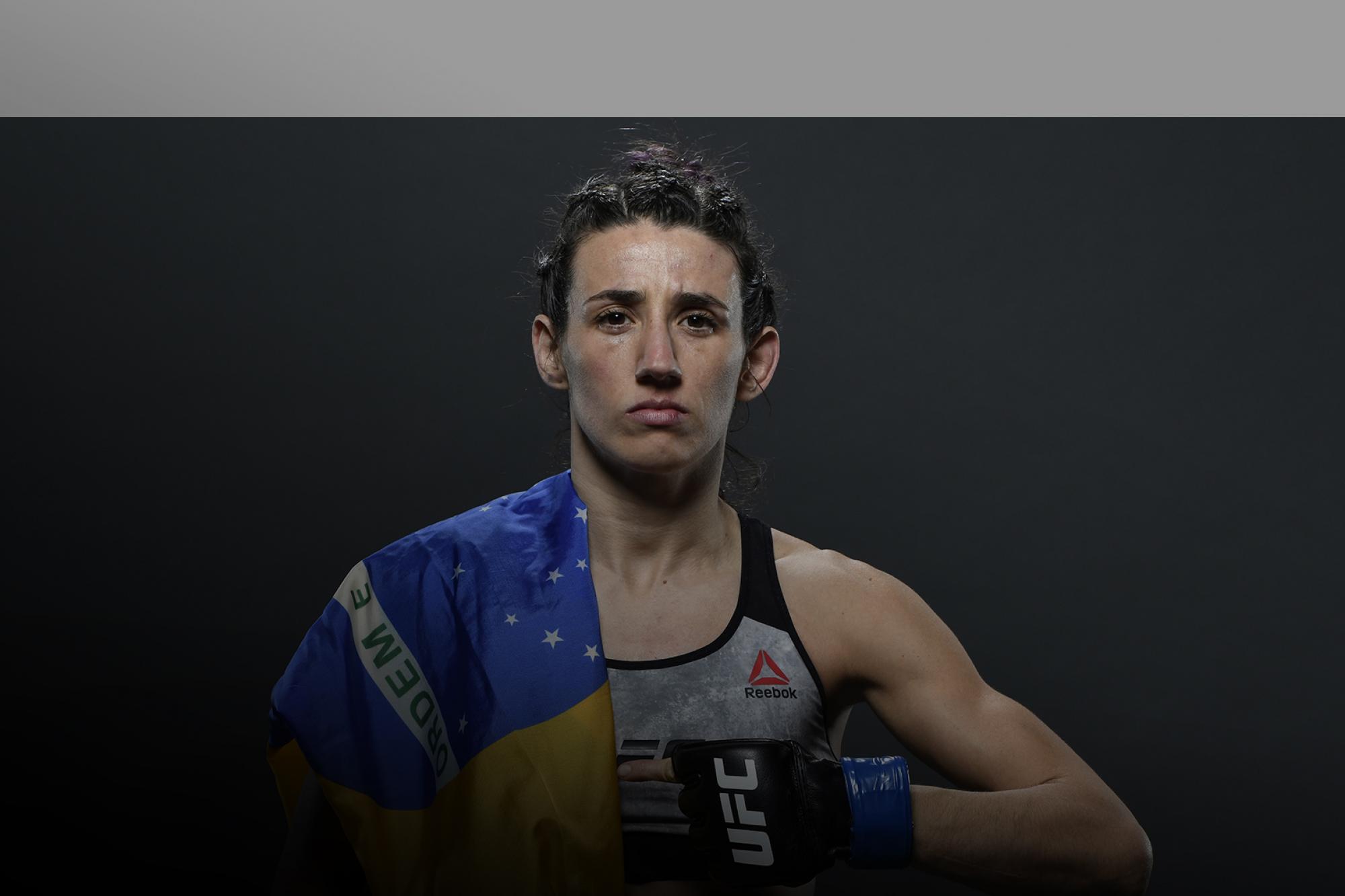 A win over Tecia Torres showed just how good Marina Rodriguez is, now she looks to take out Cynthia Calvillo at UFC DC.
By E. Spencer Kyte, on Twitter @SpencerKyte • Dec. 3, 2019

Marina Rodriguez might be the most underrated Top 10 fighter in the UFC today; not that the undefeated Brazilian strawweight is one to concern herself with such matters.

“We have gotten here without worrying about getting attention,” said the ninth-ranked 32-year-old, who stepped in for the injured Claudia Gadelha to face Cynthia Calvillo in the co-main event of this weekend’s return to Capital One Arena in Washington. “For us it doesn't really matter if we are being shown a lot in media, being on magazine covers, that kind of thing; what matters is that we put in consistent and substantial work in training and then in competition.

“The main focus will always be to work, train, and compete well.”

Thus far, Rodriguez has worked, trained and competed exceptionally well, which is why she landed in this high-profile spot this weekend. 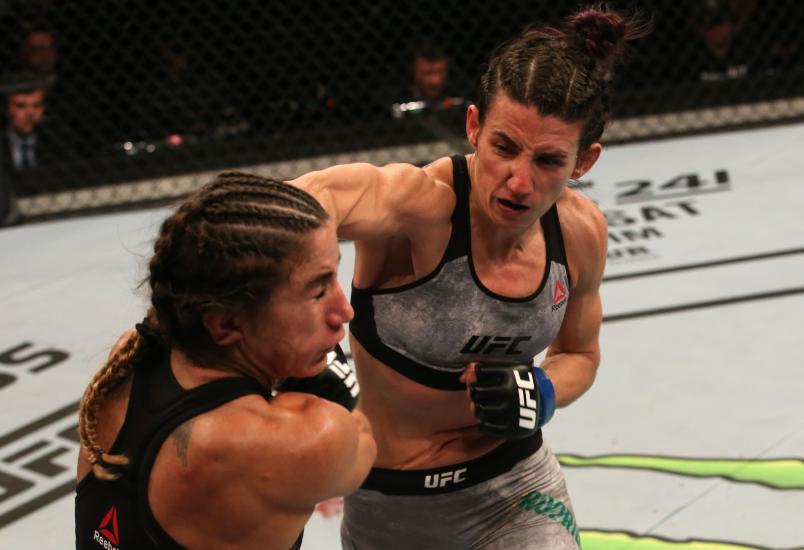 Marina Rodriguez of Brazil punches Tecia Torres in their strawweight fight during the UFC Fight Night event at Antel Arena on August 10, 2019 in Montevideo, Uruguay. (Photo by Alexandre Schneider/Zuffa LLC)

After battling Randa Markos to a draw in her promotional debut, Rodriguez picked up her first UFC victory at the end of April, securing a unanimous decision win over divisional veteran Jessica Aguilar. A little more than four months later, she ventured to Montevideo, Uruguay and dispatched perennial contender Tecia Torres with relative ease.

Although the former TUF contestant entered on a three-fight skid, the last two fighters to defeat Torres - Joanna Jedrzejczyk and Weili Zhang - both went on to challenge for championship gold in their next outings, with Jedrzejczyk falling to Valentina Shevchenko at flyweight and Zhang bulldozing Jessica Andrade to claim the strawweight belt.

But while those women were propelled into championship opportunities following their victories over the American Top Team representative, Rodriguez held steady in the rankings, with more observers opting to focus on Torres’ continued slide than the dynamic performance turned in by the unbeaten Brazilian.

“I believe everyone sees me as a strong prospect,” Rodriguez said. “But I'm still new on the international scene, so it makes sense. Still, others know that I am an athlete that is well above average, and I am doing my best to show that in every fight. Hopefully soon, everybody will see me as a unique talent.”

Even before she made her first official appearance in the Octagon, Rodriguez and her coach Marcio Malko had an idea in their heads about how things would proceed once they arrived on the big stage and, so far, everything has gone exactly as they anticipated.

“The only thing that changed was my will to work more and more to reach our goals,” said Rodriguez, who earned the opportunity to compete in the UFC with a first-round stoppage win over Maria Oliveira during one of the three all-Brazilian instalments of the Contender Series that were held in Las Vegas in 2018. “We knew that the opportunity would come and that when it did, that the level of opposition in the UFC would be a lot different than what I was facing before.

“Looking back and seeing all we have done motivates us every single day,” continued Rodriguez, who always speaks of herself in tandem with Malko. “That helps propel us forward even more. We are never satisfied with where we are; we’re always looking to evolve and improve.”

The streaking Muay Thai stylist is confident that staying the course and remaining focused on the things that got her to this point will eventually produce a rise in the rankings and greater acknowledgement of the threat she poses in the strawweight division. 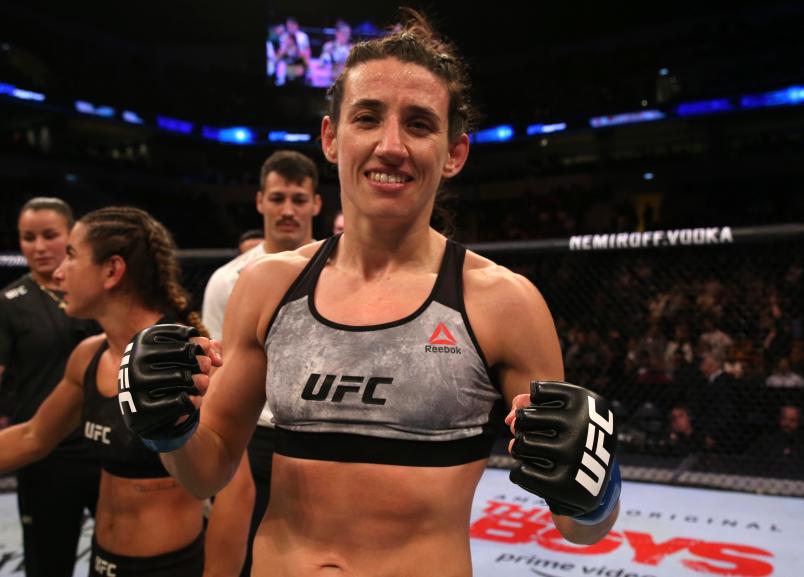 Marina Rodriguez of Brazil celebrates after her victory over Tecia Torres in their strawweight fight during the UFC Fight Night event at Antel Arena on August 10, 2019 in Montevideo, Uruguay. (Photo by Alexandre Schneider/Zuffa LLC)

“The impact on the division will come, we know it, but we are in no rush to get there,” she said. “We are still working hard to make improvements and slowly you will see the evolution in my game and performances, and with that, the results and the recognition will come.”

A little more than three months removed from sweeping the scorecards against Torres, Rodriguez jumped at the opportunity to replace Gadelha, knowing that facing off with Calvillo could very well turn out to be the bout that elevates her into the championship discussion.

“We were already expecting a chance to compete in December,” Rodriguez explained in regards to her readiness to fill in for Gadelha on Saturday night in the U.S. capital. “We were already training and waiting for the opportunity to come.

“When we got signed, the goal was to work, not to have fun, so we are always training, waiting for the next chance to show our work,” added the hyper-focused fighter. “We will not waste any opportunity by being on ‘vacation’ or not training.

“It is always ideal to have a proper camp and be 100-percent prepared in all aspects, but we are always ready to jump on a good match.” 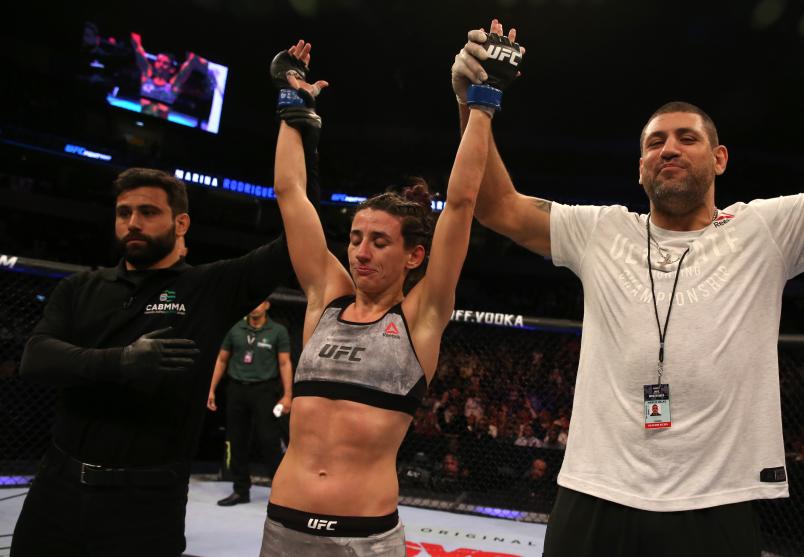 Marina Rodriguez of Brazil celebrates after her victory over Tecia Torres in their strawweight fight during the UFC Fight Night event at Antel Arena on August 10, 2019 in Montevideo, Uruguay. (Photo by Alexandre Schneider/Zuffa LLC)

Saturday’s showdown with Calvillo should be just that, as the California standout has rebounded from the lone loss of her career with a pair of victories to push her record to 8-1 overall.

Just a couple years removed from being viewed as a potential title challenger after earning three victories in five months upon arriving in the UFC, Calvillo currently resides one spot behind Rodriguez in the rankings, but is the kind of game and dangerous opponent the 32-year-old has yet to face at this level.

“Calvillo is a very tough and resilient fighter,” Rodriguez said of her opponent. “I imagine that her plan, as with most of my opponents, will probably be to take me down, but the defense to that is something we have been working to the extreme and is slowly becoming one of my most substantial skills.”

Rodriguez has come a long way in a very short time, reaching the Top 10 in one of the deepest and most talent-rich divisions in the UFC less than 18 months after securing a contract, and she can take another step forward with a third consecutive victory on Saturday night.

“We knew that the level in the UFC would be different,” began Rodriguez, reflecting on her whirlwind 18-month climb from the Brazilian regional circuit to the co-main event of this weekend’s event on ESPN. “But the biggest lessons we take are that no one is unbeatable and that we have what it takes to go in there at the highest level and compete against anyone.”