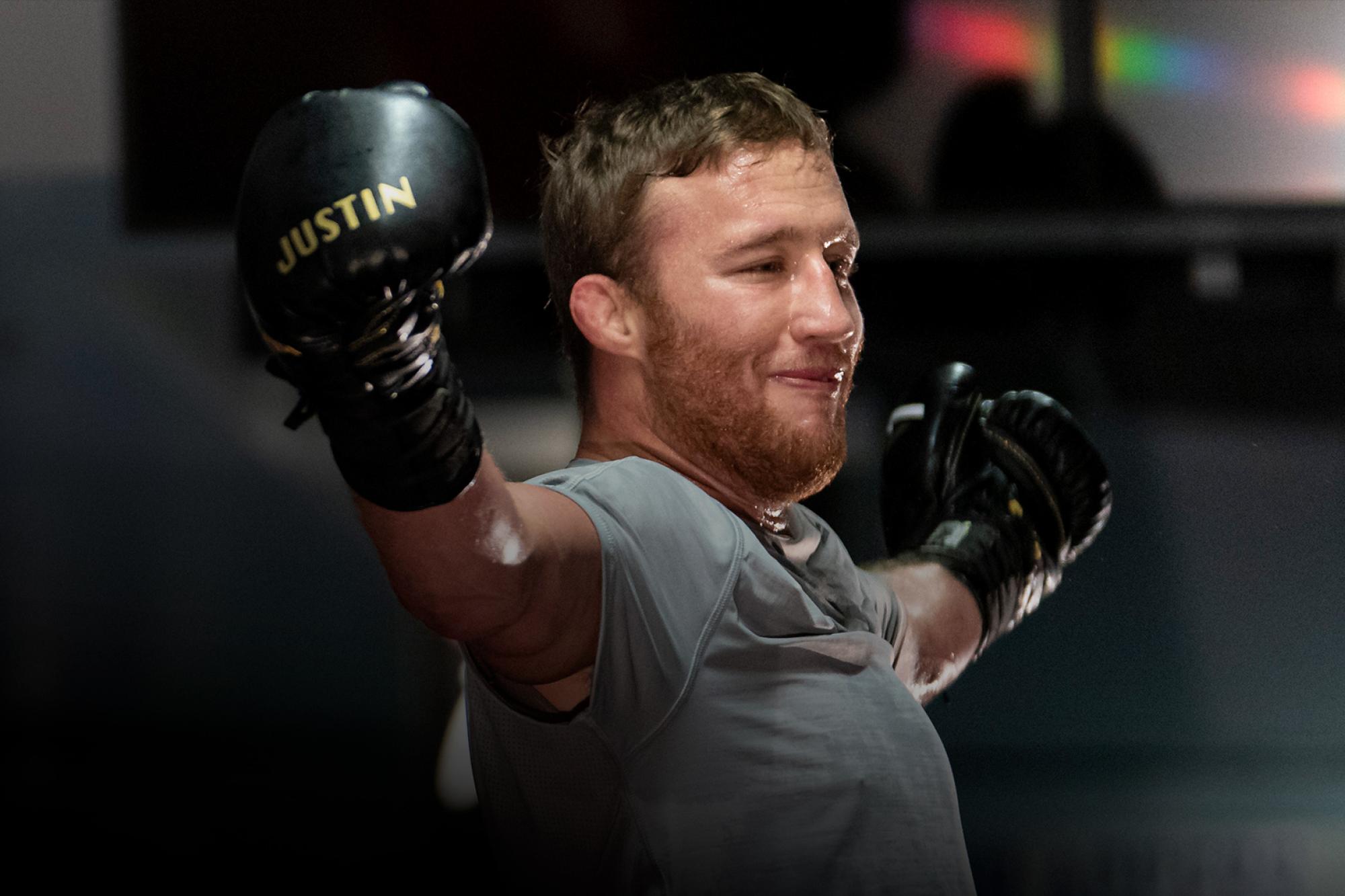 Always down for a scrap, Justin Gaethje is not only focused on finishing every fight but also chasing down the lightweight title.
By Thomas Gerbasi, on Twitter: @TGerbasi • Sep. 12, 2019

As Justin Gaethje prepares for his UFC Fight Night main event against Donald “Cowboy” Cerrone, there’s little doubt that the Arizonan has made quite an impact in the Octagon since his debut in 2017.

Five fights, three wins, six post-fight performance bonuses. It’s why he’s headlining his fourth consecutive event. But if there’s a new fan out there who might be tuning in to see Gaethje fight for the first time, he offers a mission statement.

There are those who claim such a lofty resume. Few, if any, do it quite like Gaethje. Simply put, there’s no one who matches what he does on fight night with the exception of perhaps Cerrone. It’s why this weekend’s bout is one of the most highly anticipated of the year, yet one Gaethje wasn’t exactly thrilled about.

“It’s a tough one for me,” he said. “Before I even fought, I met the guy and he’s the only guy in the whole UFC lightweight division that I would consider a friend or an acquaintance. He was the last guy I was asking for.”

Instead, Gaethje had his sights set on the likes of Tony Ferguson and Al Iaquinta following back-to-back knockouts of James Vick and Edson Barboza that put him back on track after the first two losses of his career against Eddie Alvarez and Dustin Poirier.

Go inside a training day of Justin Gaethje as he prepares for his UFC Philadelphia main event fight against Edson Barboza.

In those defeats, Gaethje’s kill or be killed attitude caught up to him and many wondered how many wars he had left in him. But in the Vick and Barboza bouts, the 30-year-old made the necessary adjustments that not only keep him on track for a world title, but that aids his fighting longevity, as well.

“Anytime you can go into the UFC Octagon and get out of there with a win in the first round, especially a KO, especially with the fact that I didn’t take any damage, it’s crucial,” Gaethje said. “You never know how long it’s gonna last, and when you can get fights like that, it lengthens your career.”

Gaethje is under no illusions about the Cerrone bout, though. He knows it’s likely that he will have to walk through fire once more to get the victory, and that means 25 minutes with an opponent who shares his love of the scrap.

“Those fights (against Vick and Barboza) don’t even matter anymore,” he said. “I’d be a fool to go in there and rely on a false confidence that, ‘Oh, I knocked those guys out so it’s gonna help me tonight.’ Preparation is everything and I am preparing to fight one of the greatest lightweights that’s ever fought in the UFC.”

And as similar as the two are in style and mindset, they’re also chasing the same thing – a gold belt that lets everyone know who the best 155-pound fighter in the world is.

“I am absolutely interested in the UFC belt,” said Gaethje. “It’s the only reason I’m here. When I do not believe I can attain that gold, then I will retire.”

Already in the top five, Gaethje believes that a win over the number four ranked Cerrone, coupled with his last two victories, will put him in that title conversation.

“In this game, how you win is a huge factor and, as time goes on, it doesn’t really matter the names that you beat,” he said. “The fact is that you won and you got a knockout. Two big first-round knockouts over two top ten ranked guys is huge, and one more win over Donald ‘Cowboy’ Cerrone and it will be hard to deny the fact that I’m right there for a title shot.”

So if he has to beat a buddy to get to where he wants, so be it, because Cerrone feels the same way.

“I have a goal here,” said Gaethje. “That’s to be the lightweight champion of the world in the UFC, and he’s in that path.”