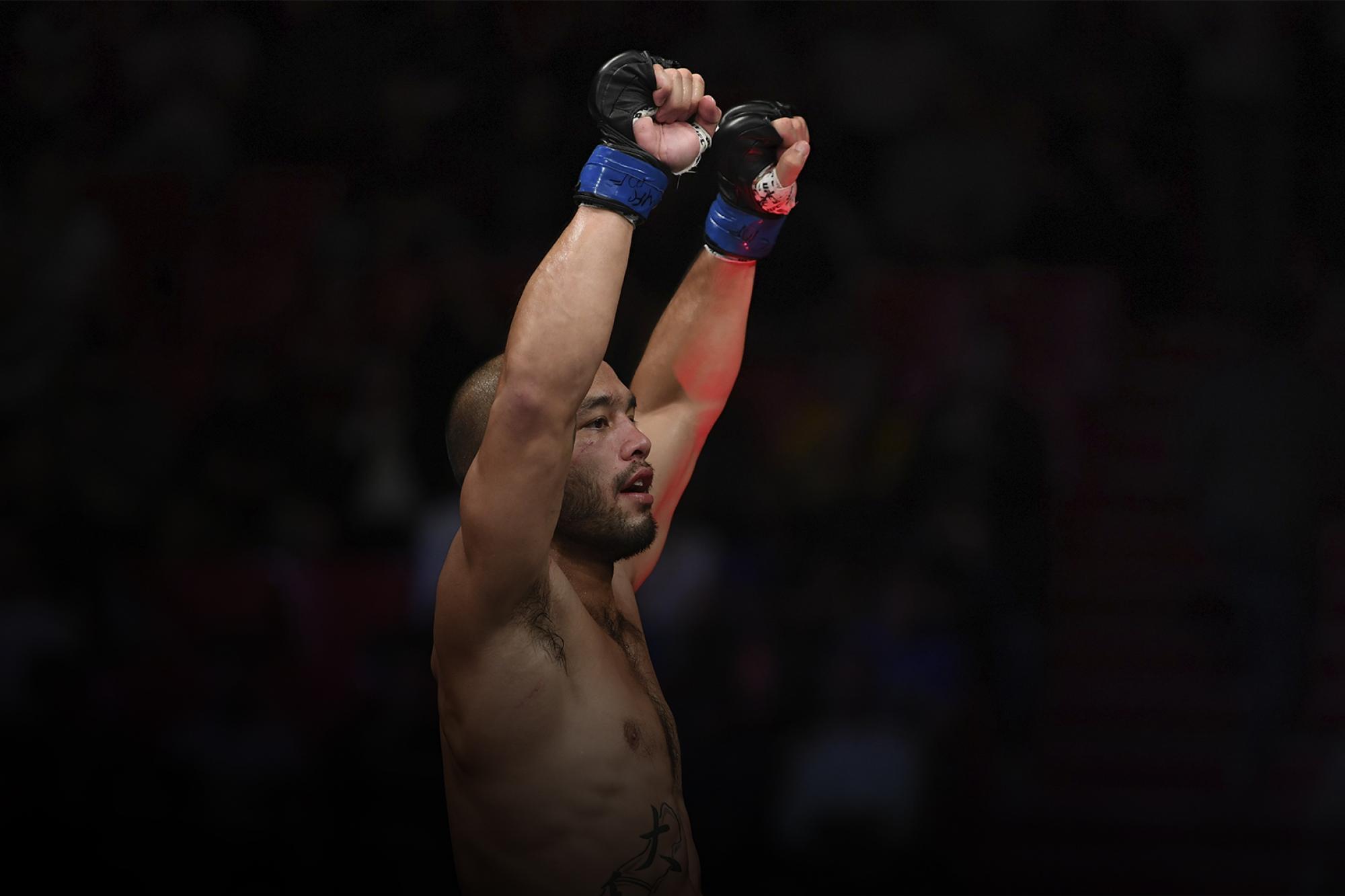 A more methodical approach benefitted Frank Camacho in his last fight, and he's looking to balance that with his desire to go all-out in Singapore.
By Thomas Gerbasi, on Twitter: @TGerbasi • Oct. 23, 2019

When Frank Camacho stopped Nick Hein in two rounds in June to snap a two-fight losing streak and announce his return to the lightweight division, he thought he would have a more epic celebration in the Octagon.

“I didn’t jump on the cage,” he laughs. “If you see the way I raised my hand and closed my eyes, it was like, ‘Wow, that was great. I did it.’ It was more a feel of relief, but it was satisfying.”

In a way, the subdued post-fight photos reflect Camacho’s performance in Sweden. Instead of the wild berserker that endeared himself to fight fans over his first four UFC bouts, “Frank the Crank” was cool and disciplined. Oh, he was still exciting, but this time he didn’t have to take two to give one back, a testament to lessons learned with his new coach Colin Oyama and a belief that to have a long and successful career, he had to stick to the game plan.

“I had a little bit more guidance and, through that, I’ve been able to increase my patience and my discipline,” he said. “Things really shifted and I saw the results and I went all-in. I just had to believe in everyone’s part of the process and then all I’ve got to do is show up to the gym and work hard and be smart.” 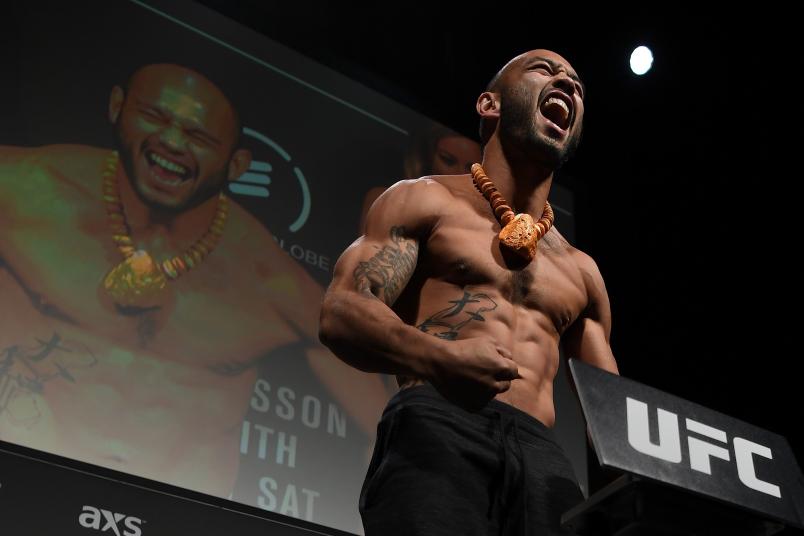 STOCKHOLM, SWEDEN - MAY 31: Frank Camacho poses on the scale during the UFC Fight Night weigh-in at Ericsson Globe on May 31, 2019 in Stockholm, Sweden. (Photo by Mike Roach/Zuffa LLC/Zuffa LLC via Getty Images)

This is easier said than done. In fact, most say it, but when the first punches are thrown, it’s back to ol’ reliable, and for Camacho, that means chin down and start swinging. It’s the way he fought when he debuted in the UFC in June 2017 against Li Jingliang, and while he lost a decision that night, he earned a legion of fans and a Fight of the Night bonus.

On Saturday, he’s back in Singapore to face Beneil Dariush and the meaning attached to returning to the scene of his first UFC bout isn’t lost on the 30-year-old from the Northern Mariana Islands.

“I’m on the same boat with the romance of the story,” Camacho said. “Singapore is very close to me because of that. I made my debut there, the fans have been great, and the city is beautiful.”

And now he has the opportunity to fight someone who has long been either in the lightweight top 15 or on the fringes of it, meaning that if Camacho wants to make his move before the end of 2019, this is his chance to do it.

But what will happen when the fists start flying? He insists that he has the same mindset as he did when he beat Hein with his back up against the wall. 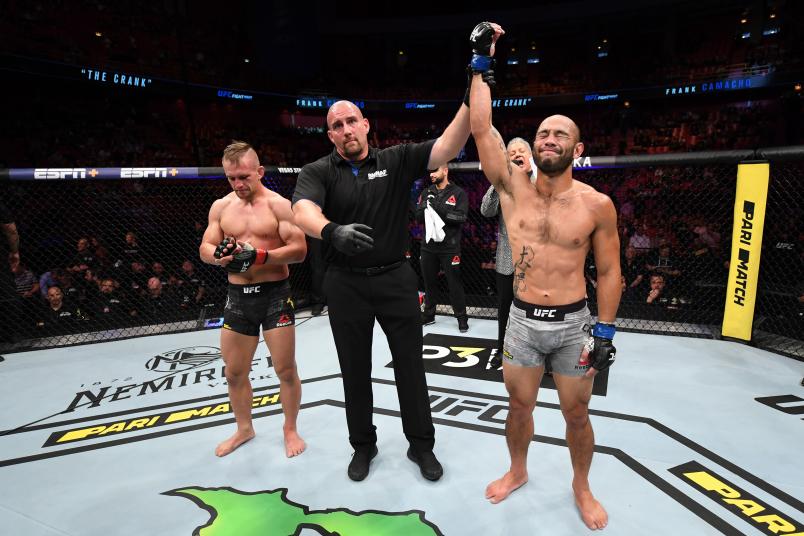 “I could have easily made that fight so difficult,” he said. “I needed a win and I couldn’t perform the way I did with Geoff Neal (who stopped Camacho in a September 2018 bout). There was no way that was happening. I have so many fights, but so many first round finishes. That was my greatest strength but it was also my greatest weakness. Now in the UFC, everyone is tough, everyone’s strong, everyone’s fast. Now who’s being smart about it? I have so many tools and I was able to show some of that in my last fight. And I gained way more confidence with that fight because of the results that I got.”

That’s not to say he didn’t want to bring “Frank the Crank” out at times.

“A couple times that happened,” he laughs. “He (Hein) cracked me good and I was about to go all-in, but then I heard Alex (Perez) and Coach Oyama. ‘Get behind the jab, Frank.’ That was their way of saying, ‘Okay, don’t get all crazy.’”

It worked. All he needs is for it to work again on Saturday night.

“I have to have discipline and patience during the fight,” Camacho said. “I can work out and train as hard as I want, but I have to implement it and show up on fight day. What gets me in trouble sometimes is that I don’t have patience.”

That was the old Frank Camacho.

“This is a great opportunity for me to put a stamp on my name in the division,” he said. “I’m just gonna have to find the balance of old ‘Crank’ and new ‘Crank.’”