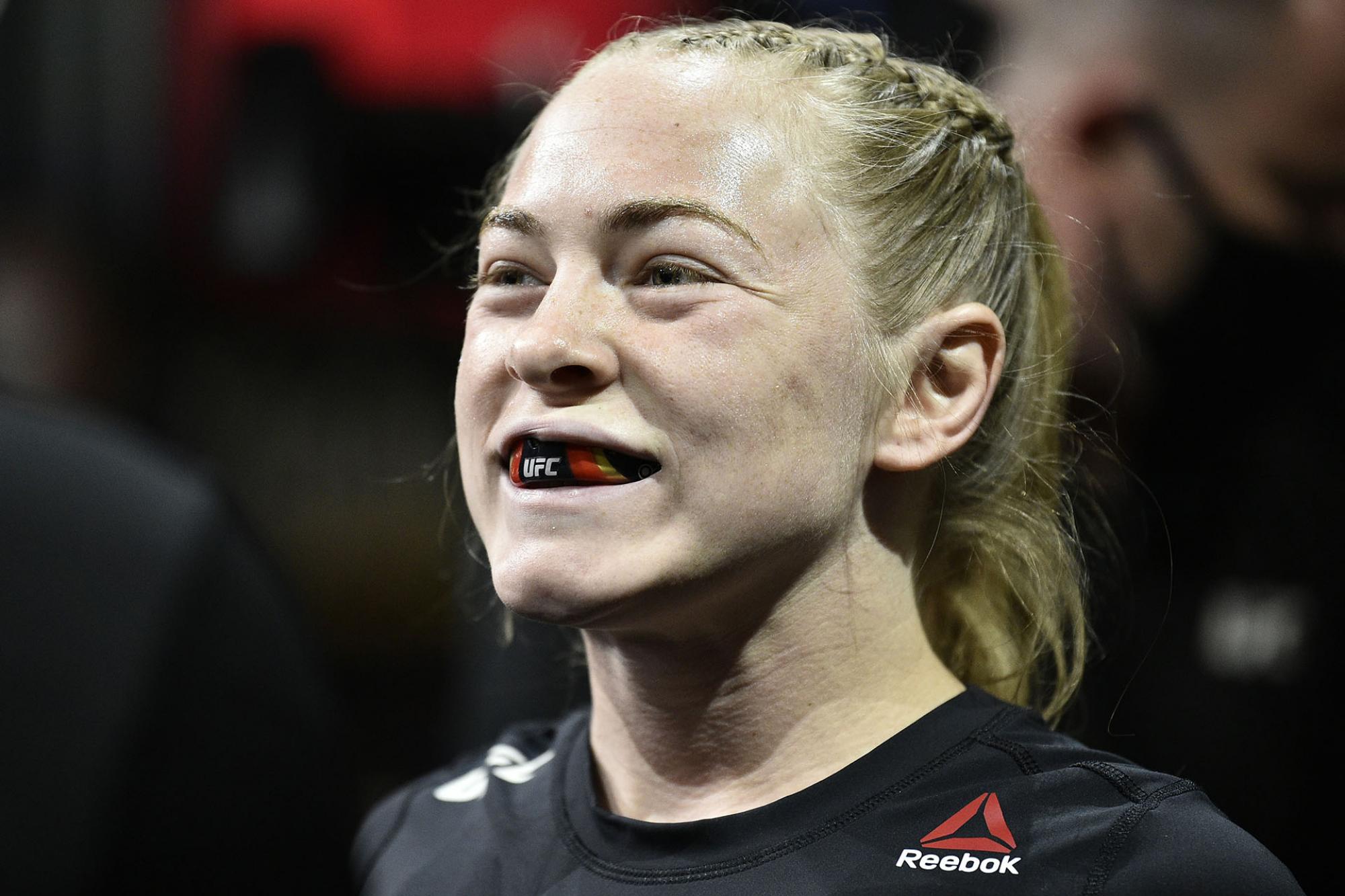 Fighters On The Rise: November 14 Edition

The UFC’s 2020 campaign has reached the stretch drive and while some might be ready to put this year behind them and start looking to the future, there is a lot that can — and most likely will — happen inside the Octagon over the next several weeks that will have an impact on how things shake out in 2021.

Historically speaking, big things tend to happen in the UFC in the month of November. From the collection of electric pay-per-view events at Madison Square Garden in recent years and Holly Holm’s knockout win over Ronda Rousey to the night with 10 fights and 10 finishes in Sydney, Australia and myriad debuts and breakthrough performances, the penultimate month of the year has always provided excitement.

And let’s not forget that this whole thing got started on a frosty November night in Denver 27 years ago.

As the ever-crucial month marches on, here is a closer look at three athletes stepping into the Octagon this weekend who could make some noise in the New Year.

This is the November 14 edition of On the Rise. 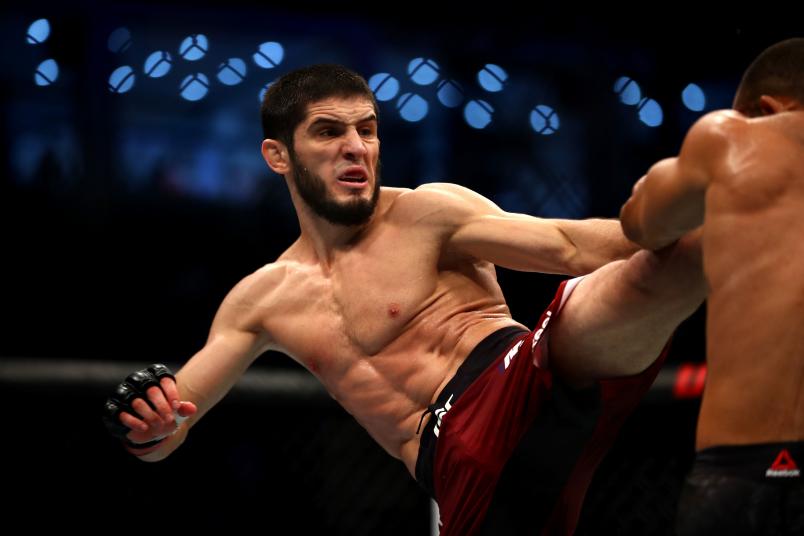 Islam Makhachev of Russia compete against Davi Ramos of Brazil in their Lightweight Bout during the UFC 242 event at The Arena on September 07, 2019 in Abu Dhabi, United Arab Emirates. (Photo by Francois Nel/Getty Images)

The longtime training partner and protégé of undefeated lightweight kingpin Khabib Nurmagomedov, Makhachev might now be the heir to the throne in the 155-pound weight class with “The Eagle” announcing his retirement following his UFC 254 victory over Justin Gaethje.

Sporting an outstanding 18-1 record that includes a 7-1 mark inside the Octagon, the 29-year-old Makhachev has thrived in the understudy role behind Nurmagomedov, gaining valuable experience, sharpening his skills, and meticulously working his way up the divisional ladder. This weekend, he takes a big step forward as he locks up with former lightweight champ Rafael Dos Anjos in his first main event assignment.

Because of their closeness, it’s easy to just cast Makhachev as a “Khabib clone,” but that isn’t the case.

Though Makhachev does bring a similar wrestling base with him into the Octagon, he’s more athletic and fluid in his movements than his mentor, with less brute strength and a lesser propensity to smash. Like Nurmagomedov, Makhachev exhausts opponents by making them repeatedly defend takedowns and try to work back to their feet, pushing an extreme pace and deploying a suffocating top game.

Watch With Your ESPN+ Subscription

Nurmagomedov’s standing as a championship threat in the lightweight ranks was bolstered by a dominant effort against Dos Anjos following several impressive victories over solid veterans and now Makhachev looks to chart a similar course here. While the Brazilian veteran is several years removed from his time atop the division and has had limited success as of late, he remains a battle-tested elite competitor and a serious hurdle for Makhachev to clear if he truly wants to follow in Nurmagomedov’s footsteps and one day rule the lightweight division. 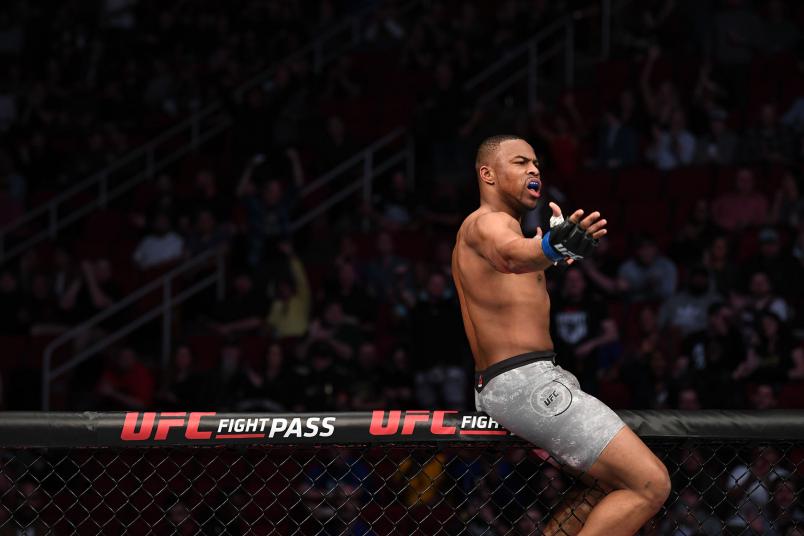 Khaos Williams celebrates his TKO victory over Alex Morono in their welterweight bout during the UFC 247 event at Toyota Center on February 08, 2020 in Houston, Texas. (Photo by Josh Hedges/Zuffa LLC)

Here’s a quick guide for how to make an instant impact in the UFC:

Williams ticked all of those boxes when he sauntered into the Octagon at UFC 247 and wiped out Alex Morono, a 22-fight veteran who had won three straight and was fighting in his home state of Texas. His handle — Khaos “The Oxfighter” Williams — and his chiseled physique had already garnered Williams some attention in the preamble to fight night, but when he laid out “The Great White” in sudden, striking fashion, it forced people to really sit up and take notice of the new welterweight in town.

This weekend has the potential to be another eye-opening experience as Williams makes his second UFC start against Abdul Razak Alhassan, another thunder-fisted member of the 170-pound ranks who is looking to get back in the win column after starting fast and fading in his most recent appearance.

Saturday’s sophomore showing is a crucial one for Williams, as this will likely be the performance fans, critics, and observers use as the true measuring stick for where he fits in the division and what his prospects look like going forward.

With another strong showing this weekend, the instant impact welterweight will establish himself as someone to keep very close tabs on heading into next year.

Though she’s made just a single appearance in the Octagon so far in 2020, Hansen has been one of this year’s breakout newcomers.

The 21-year-old turned in an impressive performance in her promotional debut at the end of June, outworking and ultimately submitting former Invicta FC atomweight champ Jinh Yu Frey in the third round to lock up her third straight victory and a Performance of the Night award. Now Hansen returns for her sophomore outing against fellow youngster Cory McKenna, looking to extend her winning streak and increase her momentum heading into next year.

The Fullerton, California native is one of those young upstarts who struggled with consistency early but has started to put things together a little more as she’s continued to gain experience and transition out of her teenage years. Hansen has been facing quality competition from the jump, and while the results weren’t always there initially, competing at a high level against skilled opposition is invaluable and appears to have positioned her well as she looks to make her mark at the next level.

Hansen is relentless inside the Octagon, constantly attacking and pressing forward, eager to secure the clinch and create opportunities to grapple, which is where she excels. She took the best Frey had to offer and didn’t hesitate for a moment when she was cut over her left eye towards the end of that bout, which tells you what kind of focus and toughness the emerging youngster possesses.

Hansen has been on the prospect radar for a number of years and took a major step forward with her victory over Frey in June. If she can secure a second UFC victory this weekend, it sets the stage for a big 2021 campaign.