The 10: Fighters to Watch in the Final Quarter 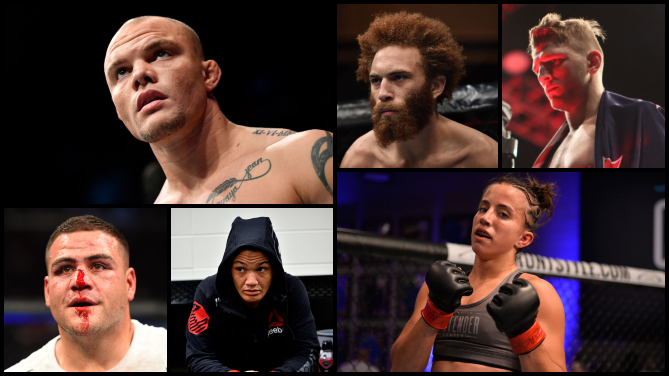 UFC 229 kicked off the final quarter of the 2018 fight calendar and set the stage for an intriguing three-month stretch of action inside the Octagon throughout the remainder of the year.

With a little pause in the action before the UFC returns to the Maritimes and makes its debut in Moncton, New Brunswick, it feels like a good time to take a look at some of the more interesting names set to compete between now and New Year’s Day.

The same way that last week’s installment of On the Rise offered one last chance to get on board the Dominick Reyes, Vicente Luque and Aspen Ladd bandwagons (which are now even closer to capacity given their performances in Las Vegas), some of the names on this list are competitors you should be paying attention to already, but I wanted to alert you to one last time in case you’re not.

The rest are a bunch of under-the-radar emerging talents and newcomers who have the potential to make an impact in their respective divisions in the future and end the year on a high note.

It’s a hodge-podge of current and future contenders, potential superstars and intriguing names I’m eager to see more from before the year is out.

Yes, I’m fudging the numbers and bending the rules a little bit here right off the bat, but there are simply too many graduates of the Contender Series scheduled to compete in October, November and December to list them all individually, so they’re getting grouped together instead.

I’ve already run down the top performances from the Contender Series and a couple of athletes mentioned there are included here, as are a bunch of other intriguing additions from the summer UFC FIGHT PASS series.

Te Edwards is up first in Moncton, taking on Don Madge, followed by Season 1 alum Julio Arce, who didn’t earn a contract, but got the call to the UFC cage earlier this year and has gone 2-0 heading into his showdown with Sheymon Moraes.

Maycee Barber is one of the most exciting prospects in the sport regardless of gender, Edmen Shahbazyan doesn’t turn 21 until the end of November and is already 7-0, and Alonzo Menifield is another one of those emerging threats from the Fortis MMA gym in Dallas that you’re going to want to watch out for in the light heavyweight division.

Add in another MMA Lab upstart in Bobby Moffett, the elder half of the Fighting Shevchenko Sisters, Antonina, and unbeaten lightweight Roosevelt Roberts and you’ve got eight alumni, all with untapped, undefined potential who could emerge as contenders somewhere down the line.

“Lionheart” has gone 2-0 with a pair of first-round stoppage wins over former champions Rashad Evans and “Shogun” Rua since moving up to compete in the light heavyweight ranks.

The cynical set sees a former middling middleweight who mauled a couple of fading names and question whether he can do the same against the current crop of contenders, while the optimistic set is salivating at the idea of a relatively young (he’s 30), experienced finisher arriving in a division that has been in dire need of new talent for years.

Later this month, everyone will get a better understanding of where Smith fits in the division when he headlines the UFC’s debut in Moncton, New Brunswick opposite Volkan Oezdemir, who turned a trio of Top 10 victories in 2017 into a title shot against Daniel Cormier at UFC 220 in January.

Before Smith hits the cage in the Maritimes main event, Haqparast will go in search of his second consecutive victory in a showdown with Thibault Gouti.

The German lightweight, who trains out of the Tristar Gym in Montreal, looked outstanding in his last effort, a unanimous decision win over Marc Diakiese in July where he shut down Diakiese’s free-flowing offense and added his name to the ever-growing list of exciting lightweights to keep an eye on going forward.

Haqparast, who lost his promotional debut to Marcin Held and then had his sophomore appearance scuttled the day of the fight due to an eye injury, is just 23 years old, boasts sound fundamentals and both looks like and fights like a younger, slighter version of Kelvin Gastelum.

Given that the former TUF winner and hyped prospect has graduated to become a title challenger himself, why not invest a little time in his doppelganger and see where it goes?

With all due respect to Mike Trizano, the man who won the lightweight competition on Season 27 of The Ultimate Fighter and the man who will stand opposite Pena on November 10 in Denver, Colorado, “Violent Bob Ross” is the most interesting prospect to emerge from this past season and it’s not even close.

The undefeated 25-year-old was in line to face Trizano after both earned opening round victories, but an injury forced Pena out of the competition. Now they’ve both got another win under their belts and we’re getting a chance to see the fight that didn’t happen during the show as part of the 25th Anniversary card at Pepsi Center in “The Mile High City.”

While his afro and awesome nickname certainly garner attention, Pena has also shown flashes of upside throughout his brief professional career, earning five straight victories, all by way of stoppage. Now training with his TUF 27 coach Daniel Cormier and the crew at AKA, the sky is the limit for the undefeated lightweight upstart.

Very excited for this next challenge! My goal is to bring an exciting style to the octagon whether it’s striking or grappling! #ufcbuenosaires #ufcargentina #birminghammma #teamrenegade
A post shared by Tom Breese (@breesemma) on Aug 22, 2018 at 8:26am PDT

Breese was one of the most hyped rising stars in the welterweight division heading into his UFC 199 matchup with Sean Strickland.

One loss, one major knee injury and two years later, he returned to the Octagon without much fanfare as a middleweight and made quick work of Daniel Kelly in Liverpool, with his performance flying under the radar because Darren Till brought the house down and a few other people had impressive performances later in the evening.

But make no mistake about it: Breese is one to watch in the 185-pound weight class, as all the things that made him an exciting, unbeaten upstart at welterweight – height, reach, power, overall skill set – still apply now that he’s competing at middleweight.

The Birmingham native, who trains alongside fellow Midlander Leon Edwards, has a litmus test tilt with Cezar “Mutante” Ferreira lined up for next month’s fight card in Buenos Aires, Argentina and if he gets through the Brazilian, who has gone 5-1 since returning to middleweight, Breese will be impossible to overlook in 2019.

A finalist on season 26 of The Ultimate Fighter, this flyweight contender will square off with veteran Roxanne Modafferi as part of the UFC 230 fight card at Madison Square Garden.

Eubanks, who defeated Modafferi to advance to the finals on TUF 26, missed out on her chance to compete in the inaugural women’s flyweight title fight due to complications with her weight cut. The Brazilian jiu-jitsu black belt subsequently made weight without issue and registered a unanimous decision win over TUF 26 adversary Lauren Murphy to cement her standing as one of the top threats in the division.

Though she is just 4-2 in her professional career, Eubanks has only faced tough competition and turned in a trio of outstanding efforts inside the TUF house, finishing Maia Stevenson and DeAnna Bennett before besting Modafferi. Working with Mark Henry, Ricardo Almeida and the Iron Army camp in New Jersey, the decorated grappler has been a legitimate title threat since the division arrived in the UFC and this is another chance for her to prove it.

“Bam Bam” has been a big hit in the UFC thus far, earning three straight wins and introducing millions of people to “The Shoey” while climbing the heavyweight ranks.

After edging out Andrei Arlovski this summer in Chicago, the 25-year-old Mark Hunt protégé gets a chance to transform the top of the divisional picture with a main event assignment against former champion Junior Dos Santos in Adelaide, Australia on December 1, where he’ll fight alongside his mentor and brother-in-law, light heavyweight Tyson Pedro.

“Cigano” has lost to three people in the UFC – Cain Velasquez (twice), Alistair Overeem and Stipe Miocic – and if Tuivasa is able to add himself to that exclusive list, the undefeated Australian heavyweight will enter 2019 in the thick of the title chase.

“Superman” won the featherweight competition on Season 27 of The Ultimate Fighter, showcasing superior grappling skills and impressive strength while fighting up a division. Now back down to bantamweight and poised to face Matthew Lopez at UFC 231 in Toronto, Katona has a chance to make an instant impression in the 135-pound weight class.

The Winnipeg native, who relocated to Dublin to train at SBG Ireland under John Kavanagh prior to his casting on TUF 27, is 8-0 overall and profiles as someone who can make a smooth transition to competing on the biggest stage in the sport without experiencing any setbacks. While fighters move to train at different gyms all the time, the focus, commitment and passion it takes to shift from the Canadian Prairies to “The Emerald Isle” is different than going to train somewhere else in Canada or with one of the major gyms like ATT or Jackson-Wink MMA.

Coupled with his obvious talent and potential for growth, all those elements combine to make Katona someone to keep a close eye on at UFC 231.

Much in the same way that people are unsure about Anthony Smith’s transition to the light heavyweight division, people are rightfully intrigued about the potential Santos brings to the 205-pound ranks, in part because he stopped Smith in a wildly entertaining fight earlier this year that turned out to be the latter’s final appearance in the middleweight division.

“Marreta” jumped at the chance to sub in for Glover Teixeira against Jimi Manuwa just a few weeks ago in Sao Paulo, Brazil, but then “Poster Boy” blew out his hamstring and was pulled from the card. Santos ended up getting a stoppage win over Eryk Anders instead and while he looked good getting off the bus at 205 pounds, beating a bulked up middleweight didn’t really answer any questions about his future fighting in a new division.

Thankfully, he’s been re-booked opposite Manuwa for UFC 231 in Toronto and much like Smith’s bout against Oezdemir will tell us if “Lionheart” is a potential contender at his new weight, so too will Santos’ clash with the British knockout artist in the middle of December.

You have literally a handful of weeks left to get on the Dan Hooker bandwagon. Consider yourself warned.

“The Hangman” ended last year as an inconsistent featherweight coming off a loss to Jason Knight, but a shift to the lightweight division has turned him into one of the most dangerous and interesting additions to the 155-pound weight class in quite some time. Four appearances have yielded for stoppage wins, including consecutive first-round knockouts of Jim Miller and Gilbert Burns, setting up a year-end showdown with Edson Barboza in Milwaukee.

Part of the emerging group of talent fighting out of the City Kickboxing gym in Auckland, New Zealand that included Israel Adesanya (who you should already be paying close attention to at this point), the 28-year-old is no longer shooting himself in the foot by trying to make the 145-pound limit, and being fresh on fight day has brought out the best in him.

Barboza is a seasoned, established contender, and if Hooker goes out and does to him what he’s done to everyone else he’s faced this year, he will end the year on a five-fight winning streak and very much in the mix in the always competitive, always congested lightweight title chase.